The line is often misquoted and when used these days it is often said with a touch of irony. I’m referring to the iconic line from the 1967 film The Graduate, when at a homecoming party for 21-year-old Benjamin Braddock, played by Dustin Hoffman, is clapped on the shoulder by Mr. McGuire (played by character actor Walter Brooke) and is escorted to the pool where Mr. McGuire says “I’ve got one word for you, just one word…are you listening?”. After a pregnant pause, the word is revealed:

Braddock: “Exactly how do you mean?”

At Ecorite we are committed to a better future using sustainable materials. In this first of a series of articles, we will explore the sheer magnitude of plastic waste in North America.

According to a recent Associated Press piece1, somewhere between 1.2 – 2.5 million tons (1.1 million – 2.2 million metric tons) of plastic were not disposed of properly, either through recycling or disposal) ended up on land, and in rivers, lakes and oceans as garbage drifting by the highway or in our other sensitive ecosystems.

Numbers this large tend to get lost in translation – most people can’t visualize a million tons. So here’s a visualization to help you. At 1,184 feet, the Symphony of the Seas, the largest cruise ship in the world, is over 250 high and weighs 228,000 metric tons. Put into perspective, the amount of plastic waste that is NOT properly disposed of in the US would equal roughly 10 of these behemoths. That is a lot of garbage folks. 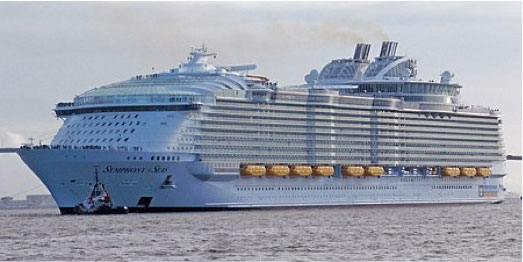 The situation in Canada is really no different in many ways to what is seen in the Unites States. An Oceana Canada report released on September 29 of this year indicates that each year, roughly 70 per cent of the plastic Canadians consume, or 3.3 million metric tons, is thrown in the trash, and approximately half amount is from single-use packaging. Furthermore, recycling is not, according to the study, is not a viable option. Only 9% of plastic waste has been recycled and 87% of the plastic waste we think is being recycled is ending up in landfills and the environment. Canadians are also prodigious exporters of plastic waste. Canada has exported roughly four million metric tons of the stuff (or just 17 ½ cruise ships worth, if that makes you feel better) to Asian countries over the past 30 years. We know, as was the case of with the Philippines recently2, that sometimes that trash gets shipped back – at the taxpayers’s expense.

We support the Canadian government’s efforts to ban certain single-use and hard-to-recycle plastics and we offer a wide variety of sustainable packaging options for many special uses in the promotional products industry. I encourage you to visit our website at https://ecorite.com/ and see for yourself.